A definition of phrenology with chart from Webster's Academic Dictionary, circa 1895 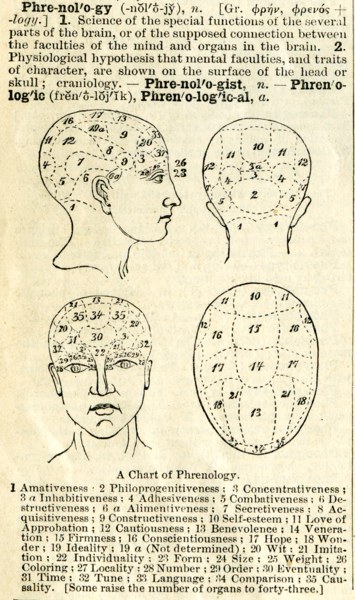 Phrenology (mind knowledge) is a pseudoscience primarily focused on measurements of the human skull, based on the concept that the brain is the organ of the mind, and that certain brain areas have localized, specific functions or modules.

The distinguishing feature of phrenology is the idea that the sizes of brain areas were meaningful and could be inferred by examining the skull of an individual. Following the materialist notions of mental functions originating in the brain, phrenologists believed that human conduct could best be understood in neurological rather than philosophical or religious terms.

Developed by German physician Franz Joseph Gall in 1796, the discipline was very popular in the 19th century, especially from about 1810 until 1840.

The principal British centre for phrenology was Edinburgh, where the Edinburgh Phrenological Society was established in 1820.

In 1843, Francois Magendie referred to phrenology as "a pseudo-science of the present day."

Phrenology has long been dismissed as a pseudoscience because of neurological advances. During the discipline's heyday, phrenologists including Gall committed many errors. In his book The Beginner's Guide to Scientific Method Stephen S. Carey explains that pseudoscience can be defined as "fallacious applications of the scientific method" by today's standards. Phrenologists made dubious inferences between bumps in people's skulls and their personalities, claiming that the bumps were the determinant of personality.

Modern neuroscience agrees that mental processes are localized in the brain and that different structures have different functions, but not that physical measurements of the brain or skull correlate with personality.

The following explanation is reprinted by kind permission of the Kansas Historical Society website:

During a skull reading, the phrenologist would run their fingers and palms over a clients head, carefully feeling for bumps and concavities. Occasionally a tape measure or callipers also were used to get precise measurements. These shapes would then be compared to a three-dimensional head or a chart to determine which of the approximately 35 organs were responsible for an individual's aptitudes and characteristics.

According to the phrenologists, both physiological conditions (such as circulation and digestion) and mental faculties (such as cautiousness or veneration) could be measured on the skull and graded on a scale of 1 (very small) to 7 (very large).

For example, if a person was determined to have a very large Eventuality organ, they should "possess a wonderfully retentive memory of facts, incidents, and general knowledge, and have strong craving for information. They would be a great devourer of books, newspapers, and periodicals; and with large Language and Imitation [organs], would excel in story-telling."

And a person with a very small Eventuality organ? According to the 1869 book, How to Read Character, "Your memory is utterly untrustworthy. You forget almost everything relating to what has happened, no matter how recently."